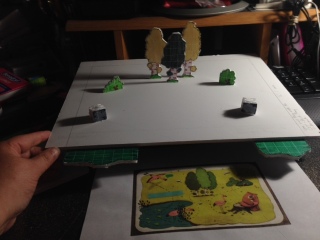 I just finished another summer of CET.  It’s a whirl wind of activity in which I design, track, manage, and build the sets and tech elements for 9 productions.  Some are bigger than others.  All of them are a ton of work.  I usually start by building a model for each main show of the season.  This year I made three, took pictures of 2 and skipped on all together.  The beginning of the season sneaked up on me. 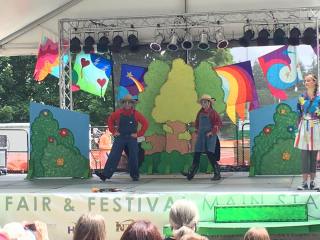 The first production of the season was “You Will Be My Friend!”  I loved this show!  The directors wanted something simple.  I designed my little trees and bushes from the children’s book.  I used double core cardboard and painted it to match the book.  It was light enough for the tech kids to move around and cute enough to enhance the production. 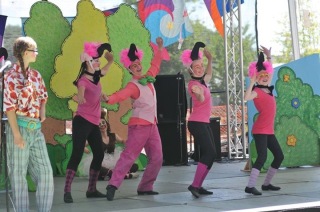 This show has to be light because it gets on a truck and moves to the park for production.  The kids have to move it off and on the stage for each performance.  I was so pleased with how it turned out.

I also used the Lilly pad platforms I made last year.  They were the perfect steps for the blocking of the show.  I hope I can do something like that again.

I designed a playground for the show that performed in the library.  I had my kids in the Advanced Construction class build each of the play structures.  I split the kids into teams and had them compete for who could make the play structure that would sell for the most at auction.  It was fun raiding my son’s Kinects and my daughter’s boyfriend’s Legos for the model too!

I designed a rocking horse chair for this production.  I’ve never done anything like that before.

I was a little worried about how it would work.  I had the team build it first out of cardboard to see if it worked.

It did!  Then they went to town using the real materials.

The second team worked on a see saw.  I was able to find a plan for this on line.  They had it easy. 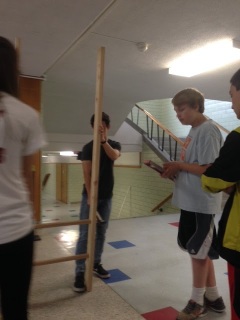 The third team had a plan, but they lost it on the second day.  They improvised.  It was a little wonky. 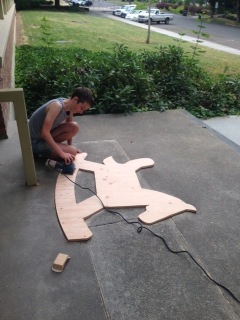 They all learned to use the power tools better.  Even the sander.

There was a ton of sanding.

The jungle gym had some issues.  At first, I couldn’t figure out why is would not square up.  All the measurements led me to believe that it should be square and plumb.
But it wasn’t…

Then I measured the ladder rungs that the kids had help cutting the holes for.  Sadly, the help had cut the holes a full 1/2 inch off.  No wonder it couldn’t stand up straight!  I was able to make it safe enough for the production, but I didn’t feel good about selling it.
The horse turned out great!  Even I could sit and rock in it.
The see saw was a ton of fun.  Even the program director gave it a try.

This set got on a truck and went to the library.

It was perfect for the production and the director had kids climbing all over the play structures.  That made me so happy.  I love it when a director actually uses the stuff I give them.

We did borrow the rocks.  It was nice to not have to create those.  I have to say, I am so proud of the kids in the Construction class.  They did great work!

The high school age kids are supposed to create their own sets, costumes and props.  They come to my class to build these items.  I “gently” prodded them along to create these trees from donated cardboard tubes…

And we created this cool hand cart using some wheels we borrowed from Pentacle Theatre. 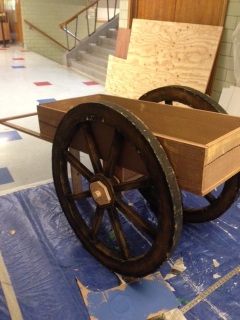 They even learned a little about dry brushing…

Their show got on a truck and went to an off sight venue.  The stage was far to small for the trees so they were left behind when the show traveled.  They were only used when the show performed on the home stage. 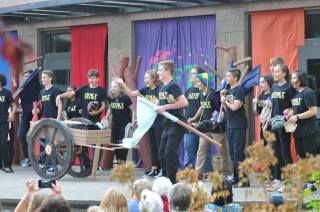 Their set turned out nicely…

The youngest kids in the program perform three small plays.  Usually, I only need to provide the backdrop I created a few years ago and a few blocks.  This year I created a few little props and drew some cute little pictures for The Zoo production. 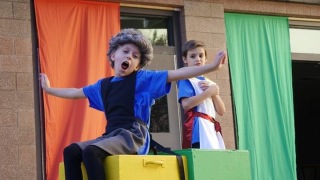 These little shows really are the heart of CET.

These little shows are what captures the heart of these young performers.

Being a part of the production of the props and set pieces helps the kids feel more invested in their production.
Besides… They are so darn cute!

I loved how everything I created for these little shows turned out.

I also created a backdrop wall for a travel show that traveled to several different venues.  I made this wall with muslin hoping that it would be light enough for the kids to move the walls themselves.  Sadly, the first performance, the moving committee punched a hole in one of the panels.  At least the kids could move them around.

A parent created a large trunk for this production as well.  It was pretty heavy.  My friend that does props created some fun ears for this show.

Sometimes it’s hard to come up with all the props for all the different productions.

We are lucky that we have a large number of things to pull from in storage.

The main production was Shrek.  It was a big set.  Sadly, I did not get a picture of the model for this show.  It’s always and interesting process because I have to do most of the painting in the hall.

We cover the walls and floors to keep the school clean.  This year I invested in RAM board.  SAVED MY BACON.  It’s expensive, but oh so worth the price!

The director wanted the set to look cartoon-ish.

I accomplished this with the painting…
I started with platforms from stock to make levels.

Then we raised the walls… 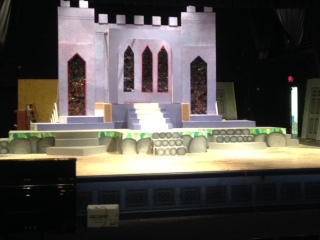 That was a little scary.  Those walls were 16 feet tall and the guys helping me couldn’t agree on how to accomplish the task.  If only they would just listen to me… well… eventually they do.

I created another “tree” curtain for this show.  This one 12 feet tall and 20 feet wide.  I needed it to mask the castle when I wanted to make the scene more swamp like.

One of my favorite features were the stain glass windows.  We created them with gels.  It was a great activity for 4th grade students to do.

In all the set turned out great!
Our only production after Shrek was the Final Arts Night that features performance from select classes.  One of my colleges created a great video about tech hall.  I love that they got their moment in the lime light! 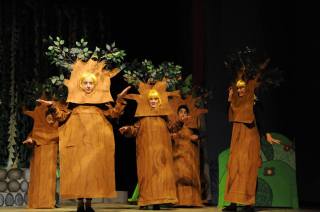 CET is and exhausting and rewarding experience. 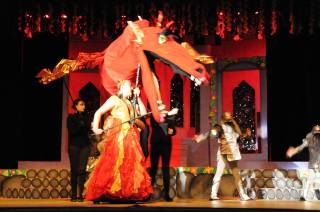 (oh… my friend made this cool giant dragon puppet too) 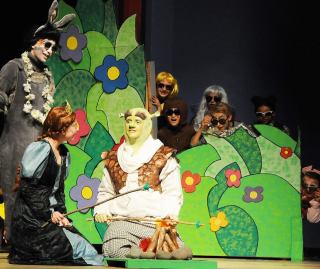 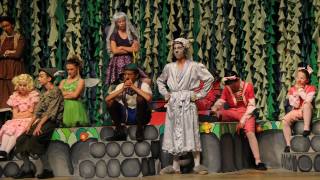 Then I can’t help myself and I’m back at it the next year. 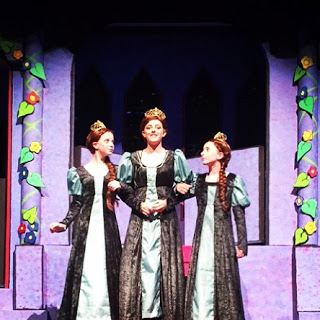 This year wasn’t too bad because the weather was cooperative and it didn’t get real hot until the very end of the season.

I also got to work one last year with my daughter Hannah.  I will miss working with her in the years to come.  Not only is she a great worker, she is a great teacher.  She is patient, clear with instructions and friendly.  I think many of the tech kids will miss her too.

I can keep doing this gig as long as Lilli wants to be at CET.  When she is done, I will be done because I will need to be a parent.  For now, she loves to go and participate in all the dance styles that are taught there.

(I made these cool swords too!) 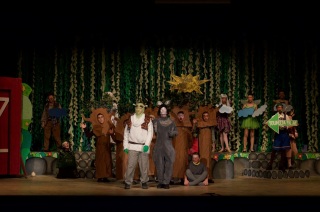 And then…. after 5 weeks of complete chaos… it’s over and we are back to black.  Until the next season!

Originally posted 25th July 2016 by Wendy Boyack on Resigning as the General Manager of the Universe powered by Blogger.