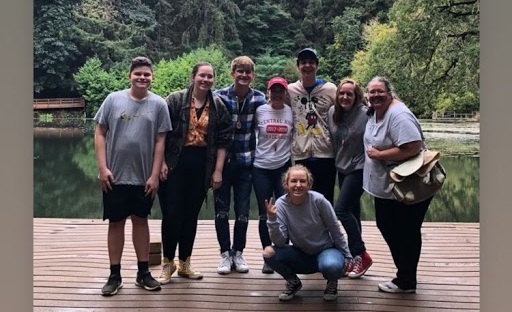 Okay… I have a little more time today to catch things up. So here is the September report. I know. You are in shock. As the summer ended we attended the last summer concert at the river front park. It was a Micheal Jackson Tribute concert. The guy was pretty good, even if the people running sound were lousy. Half the time you couldn’t hear the singers. But the dancing was great and Lilli had a blast dancing around with Riley down by the stage.

Freya and Kimber went on a little canoe trip for Freya’s birthday with Yvonne and a few other people. Freya was so excited to tell me all about it.

Lilli and I went to Camp Thespis, a leadership camp for kids in leadership in their Thespian troupes. I went because Jeff was busy with a show and with being on the State board of theatre teachers. It was camping. That should tell you just how much I love Lilli and how much I find it is important for her to learn good things during this leadership experience. I couldn’t sleep well and there were so many hills to climb! The kids did learn some good things though and they are already applying them to our Thespian troupe.

We all had our first day of school. My department dressed up for the introductions. I was way up high in the press box running sound for the event. I liked the “get-to-know-you activities I did. They weren’t your run-of-the-mill activities and the kids responded well.

Kimber and the kids started home school and Cub Scouts with the city troupe. Some days go well and some days don’t go so well. But they are making a go of it.

McKay and family got to go to a Volcanoes baseball game and Lenayah started full time kindergarten. Kaiden moved up to the middle school

John and Hannah took a weekend to go on another hiking adventure while Lilli and I stayed home for a set build. It’s good that John has someone who enjoys all that outdoor stuff with him.

He also went on a hike with random strangers he met on the internet. I have to admit, I did think that was odd. I mean… what if they were crazy ax murderers. But they weren’t. They were nice. And John had a great time hiking somewhere new.

We did a little canning of some spaghetti sauce. Most of it turned out fine, but we did have one batch of mishaps.

We finished remodeling and updating Hannah’s room and the bathroom. I’ve been wanting to make a cleaner, simpler look in our home decor. I had John help me wrap the windows with wood trim for a farm/country look, painted the walls gray, and the floor black. John resisted the black floor at first, but I love how it turned out! Then we started making the bedroom at the front of the house into a office. I want the office out of my bedroom. We did the same thing to the windows in the office. Oh! And we got cool fancy window blinds too. We painted the walls gray and the floor black. By now, John is convinced that the black floor is pretty cool.

Lilli and I spent the month working on 13 the Musical. It’s a fun little show. The kids in the show grew a ton.

All of the kids came over for Sunday dinner a couple of times. Kaiden loves the swing I got for John on Father’s Day.

So… that is it. That is what we were up to in September. As long as I am updating my blog, I should go way back and pick up the last three shows we did at Central. But that might be hasty.

What the Chrysanthemum Knows -- by CHRYSANTHEMUM STORIES

The Story Library for Sensory Readers