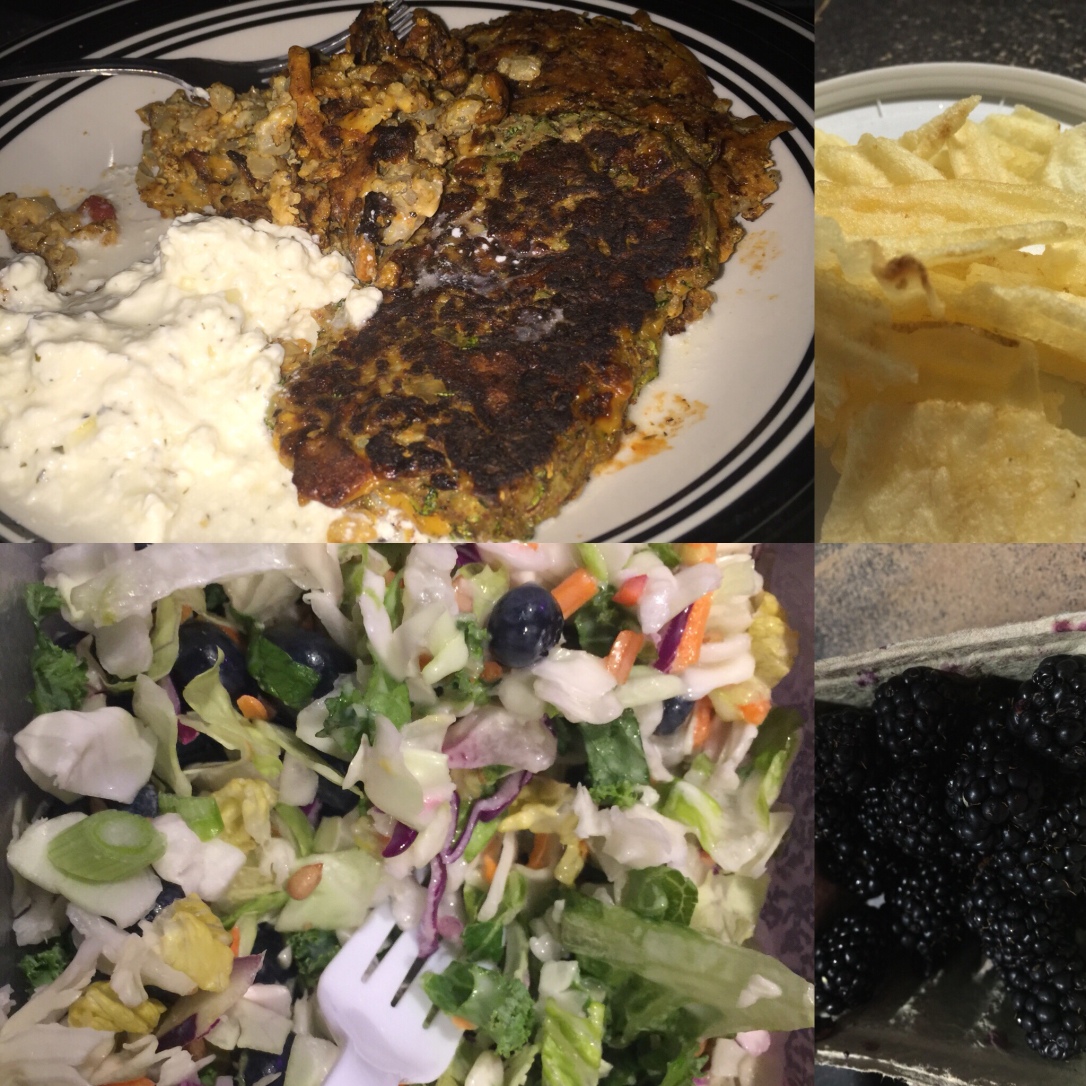 Monday plant eating opened with some of the best black berries I have ever eaten. I got them at the farmer’s market. I think they called them triple berries. Whatever they are called, they were so juicy and sweet. I ate 2 boxes. That led to my down fall of eating a few potato chips. Oops. At least they are plants. LOL. I had a salad for lunch and even added some blueberries to the salad. My daughter made some tasty cauliflower cakes and zucchini fritters for dinner. She made a tahini sauce of source to go with. It was pretty tasty as well.

Tuesday was a leftovers day. I ate left over broccoli and almonds, baked squash (but I added a few mozzarella balls), left over baked eggs and veggies in spaghetti sauce, some cantaloupe, and a few crackers. I know it’s an odd assortment and the picture makes it look like I ate mostly an orange diet. I guess I was craving whatever vitamins and minerals are in orange foods. LOL.

On Wednesday I ate blueberries, a salad with olives, cucumbers, a vegan coleslaw, and greens from my garden. I ate the last of the baked squash (no one else in the house would eat it), and the rest of the broccoli topped with avocado and poached eggs. It was super tasty. 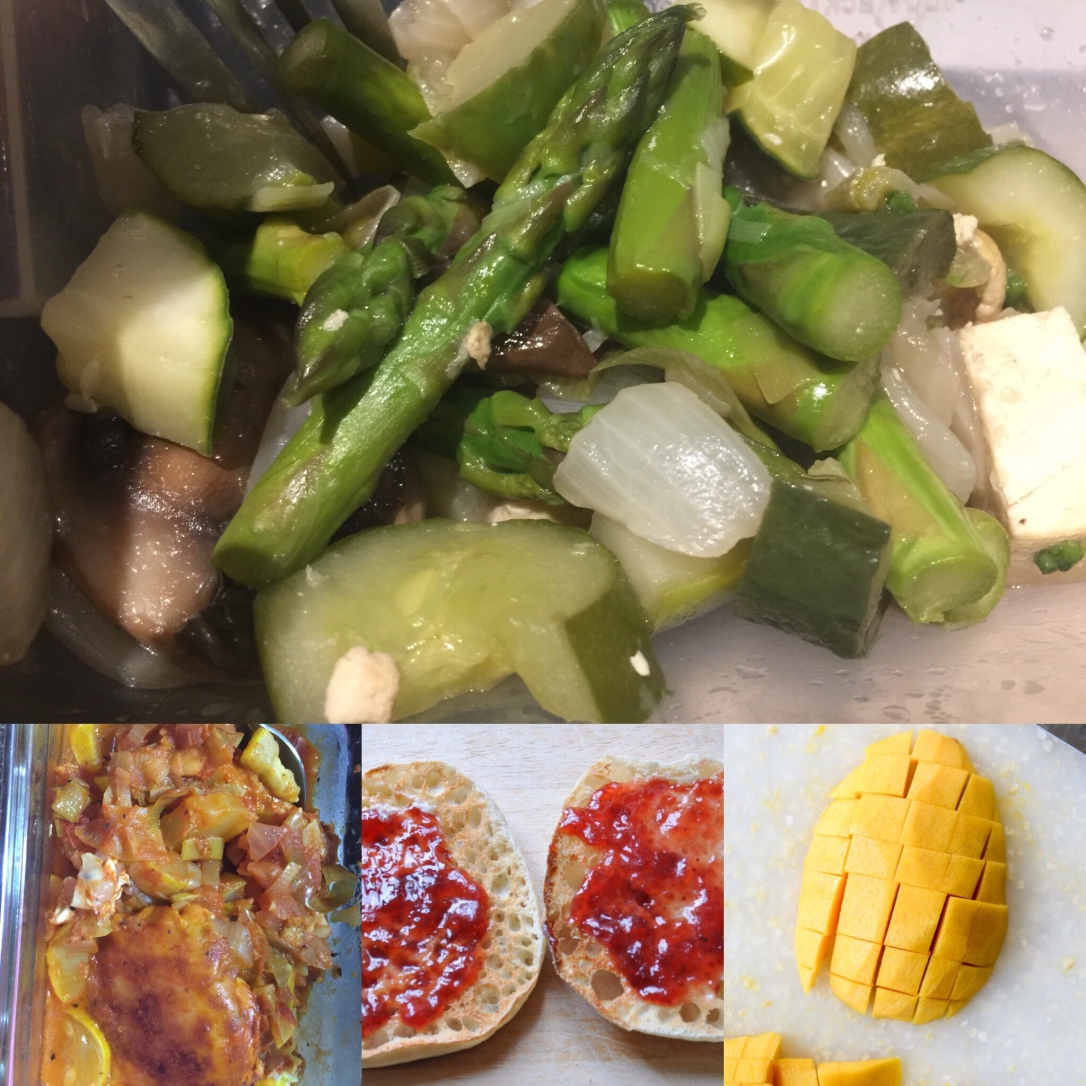 On Thursday I was visiting a friend and she shared some mango with me. It was very delicious. When I went home, I made jam from the berries in my refrigerator. I didn’t want them to go bad so I dumped blueberries, blackberries, strawberries and raspberries into the pot and made jam. I broke my “no sugar” rule and had a little on toast. Holy cow! Sugar rush! I guess that happens when you haven’t had sugar for over a year. I also ate the last of the veggies and eggs in spaghetti sauce (not sure why I can’t get my family to eat this yummy dish) and a lovely asparagus, mushroom, cucumber, onion and tofu stir fry. I love just saluting this in a while cooking wine. Very tasty.

Friday was a travel day. Before we left home I was able to eat normal. I ate some blueberries and and some toast with my new jam… braking the “no sugar” rule again. (Sheepish grin). I also ate the last of the cantaloupe. I didn’t want it to go to waste while we were gone. I also ate a salad with the last of the blackberries. As we hit the road for our long drive, we stopped at Pita Pit for dinner. I enjoyed a yummy falafel and veggie filled pita. My daughter calls Pita Pit a healthy twist on Subway. My husband had never been there. He is now a fan. 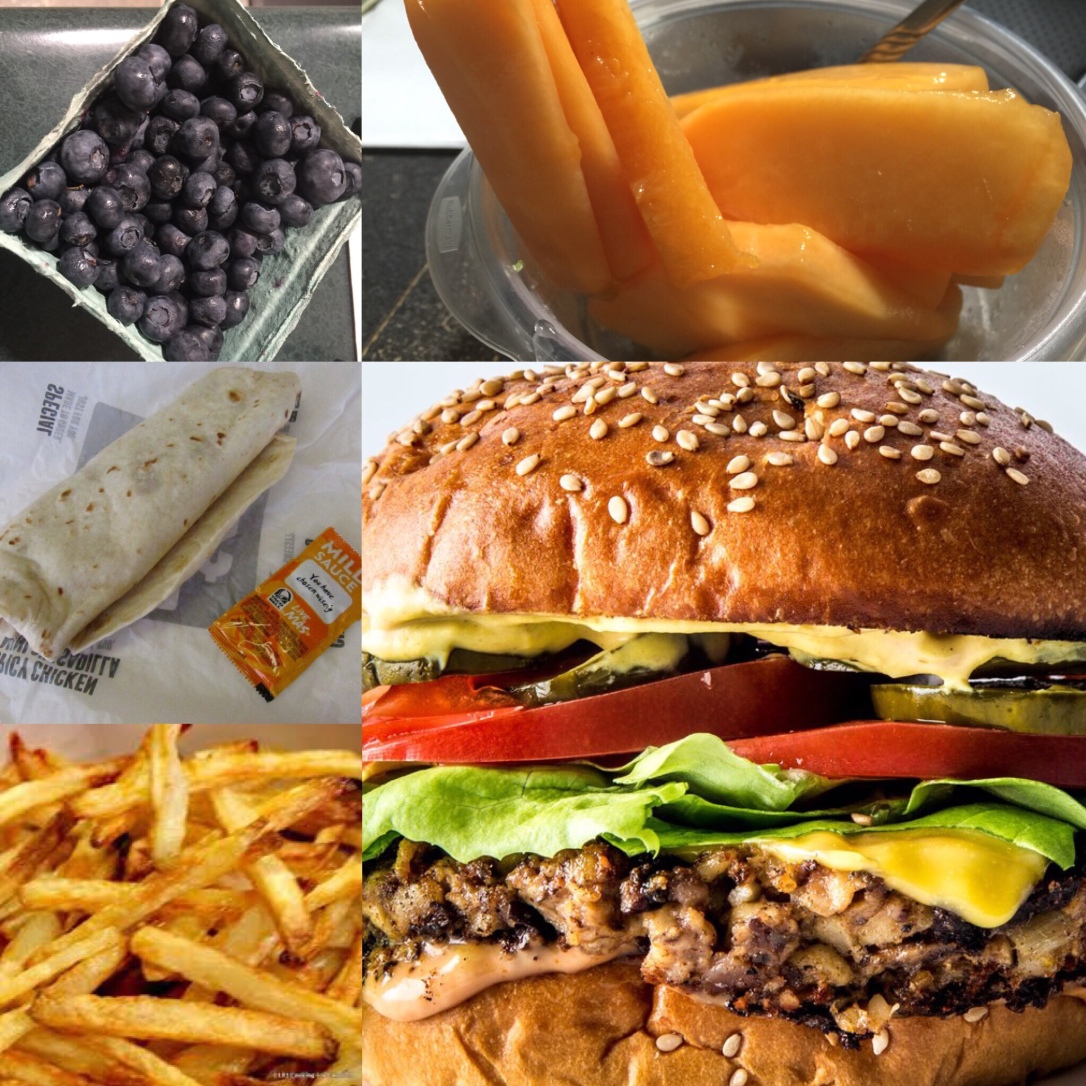 Saturday was spent in the car. It was a long drive. We started at my mom’s house. She fed us blueberries and cantaloupe for breakfast (my daughter and husband included the bacon and toast as well). Further into the drive I had a few almonds and a couple burritos from Taco Bell. It is hard to find good foods while traveling down the road. When we got to my daughters’s house, she had prepared burgers and homemade fries for dinner. She even had a veggie burger just for me!

On Sunday I had a salad with some blackberries. I made an apple cobbler for the family. My daughter had some coconut sweetener so I was able to make. A sugar free one for myself. I so had a baked potato with vegan cheddar and vegan chili. All very tasty!

So now I am ready to face a week of veggie eating away from home. Thank goodness my family is doing their best to accommodate!

How do you travel and keep up the veggie eating?

1 thought on “Keeping it Healthy… almost?”